What’s a HAM Radio – Why Is It Called HAM Radio 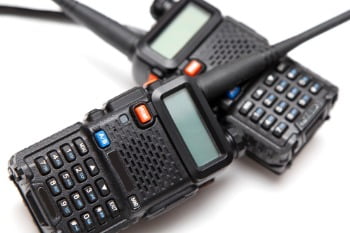 Have you ever wondered why is it called HAM radio?

Those who are passionate about amateur radio devices and invest time in them as a fun hobby should definitely learn more about the origins of HAM radios, how do they work, what benefits do they bring to the table, what problems you can encounter with them, and so on.

This article will answer all these questions and more. Read below:

What is HAM radio?

Let’s start with a simple definition of the HAM radio.

HAM radios, or amateur radios how they are also called, are electronic communication devices.

Using one, you can communicate with people around the world, without the use of Internet services or mobile phones.

People can build their radio stations with the help of these devices and start discussions on various topics – sports, education, politics, anything.

Of course, to start a professional radio network, some licenses might be needed, but the technology used is quite straightforward.

Why is it called HAM radio?

Now that you know more about the device, here are some details on why is it called a HAM radio:

HAM is speculated to stand for Hyman-Almy-Murray, an acronym that gathers the initial letters of the first amateur wireless radio station owners’ last names.

Albert Hyman, Bob Almy, and Poogie Murray are known in the industry for more than 100 years now.

There’s another take to this. Some say that the term “ham” was used to describe amateur radios long before the Hyman-Almy-Murray situation.

The term “ham” is known to have been used around the 1880s as a pejorative term, meaning “poorly made”, “not professionally made”.

Of course, this leads us to the word “amateur”, which involved that the person was not skilled in what they were doing.

Initially used as a simple slur, the “insult-like” term evolved in time and was later adopted for describing amateur hobbies, losing its pejorative sense.

That’s how we were left with HAM radio, meaning an amateur one, meant for hobbies and non-professional use.

The American Radio Relay League also had its own take on the term’s etymology, in the sense that the term “ham” was used by professional landline telegraphers when referring to amateur radio operators.

Again, we encounter a pejorative use, as these telegraphers considered amateur radio operators poorly skilled.

The term slowly entered the telegrapher’s slang, and it was then used for amateurs who used this type of radio for entertainment.

Oscar Hammarlund built such a strong radio equipment brand more than 100 years ago that the term “ham” might come from there.

Hammarlund is a famous radio manufacturing company, probably the USA’s oldest one as well.

Even though the company was dissolved many years ago, it is said that the brand might have had some influence in naming HAM radios.

Because their products were quite the standard at the time, people might’ve started referring to amateur radios as “ham” radios, short from Hammarlund.

While why is it called a HAM radio might still be a mystery, we know at least some things about the term’s provenience.

The Benefits of HAM radio

A HAM radio can be used without a connection to the Internet or other methods of communication that are known to us today.

When you can’t use your mobile phone and perhaps, you’re in an emergency situation, what’s there to be done other than using radio communication?

Those who don’t want to rely on classic methods can easily opt for HAM radios. It’s also a nice way to step away from classic technology and experiment with less popular devices.

If you do decide to try out a HAM radio for entertainment purposes, the good news is that you can use it for as long as you want.

It’s very easy to set up and doesn’t require any specific knowledge to figure out.

Thanks to its energetical efficiency and long-rage capabilities, it’s a device that can be used from anywhere, at any given time.

Obviously, because of all the reasons stated above, a HAM radio makes up for an extraordinary device for emergency situations.

You can set up frequencies for emergency situations that are nationally recognized.

Most countries keep these band-plans available for amateur radio users who rely on the frequencies to communicate during emergencies.

Thanks to its long-term usage, low power requirements, and long-distance reach, a HAM radio is an ideal solution for distress situations.

The Common Problems of HAM Radio

Even though you can use a HAM radio anywhere in the world, there’s a downside to it.

If the weather is bad, so will be the connection you’re getting. HAM radios are easily influenced by bad weather and terrain conditions, so you might want to look into that.

There are certain ways to improve the quality of the communication, but you’d have to jump into the full RF terminology and get acquainted with different settings.

You should be aware of radio frequency components, connectors, transceivers, and all other parts that you might deal with when setting up your HAM radio.

This is important because you’ll have to adjust the settings to use the amateur radio as desired, be it in an emergency or entertainment situation.

You should also know signal generation theoretical matters so that you can put them into practice in different scenarios.

You’ll need the radio itself and a transceiver. The transceiver can be either mobile or mounted, depending on your needs.

Of course, based on the context in which you’re using the HAM radio, you might need to connect it to a laptop.

If you’re opting for a rather classic setup, you’ll need regular power cables, antennas adapted to your purposes, receivers, or other radio equipment to make your communication possible.

Difference between HAM radio and other radios

If you have a hard time picking between different radio types, it’s important to know the differences between HAM and the other options available out there.

The most common debate is held between HAM radios and CB ones, to the detriment of VHF or UHF which are more expensive versions of the latter.

The main difference between HAM and CB is power. HAM can reach up to 1500 watts, while CB can only reach 4.

Even though a HAM’s power capability is tremendously high, they are still used at an average of 4-5 watts, putting them on the same line with CB. Of course, that depends on your needs regarding radio usage.

Another difference is that CB uses AM and HAM uses FM ones. HAM allows for clearer connections and less static in this respect.

Because of this, CB radios tend not to adapt well to terrain differences, like valleys and mountains.

HAM gains ground here because of its high-frequency capabilities, having a rather stable signal, punching through terrain or weather blockages more easily.

HAM radios can be quite expensive if you want to build them yourself, especially if you plan to use them for a wide audience, amateur entertainment, and so on.

You’d need the radio itself, without accessories, which can go up to $160 and you need to get it licensed, which might cost around the same – $150.

You’ll need radio accessories that go up to $100, as well as a power supply that can be bought at around $150. As you may notice, this is quite pricey, but it’s only applicable for heavy-duty HAMs.

You also have the option to buy pre-made HAM radios, in the form of walkie-talkies, with all accessories needed already included.

These can be found under $100 and are ideal for beginners who are just starting with radio technology.

Here are two ready-made HAM radios you can use for beginner purposes:

This high output amateur radio is great for those who want to start using such technology.

It has three power levels, going from 1 watt to 8 watts. This is why you can use high outputs with it.

It supports both VFO and MR frequency modes and either can be locked through software.

It has a push-to-talk switch like most walkie-talkies. Plus, it comes with an in-depth user’s guide to help you go through all the settings.

This is quite a powerful HAM radio containing the whole kit you’d need.

It has a scanning function, as well as a VOX and monitor one. You can even opt for a busy lockout time-out.

It has two voice prompts – one in English and one in Chinese. You can use it in the power-saver mode as well, for emergency situations.

It has an alarm function included for this very purpose. It’s a PC programmable device, fully certified by FCC.

The user guide has all the technical specifications you’d need for using this HAM radio. Take into account that you’ll need CHIRP to program it, though.

Can you use a HAM radio without a license?

In some countries and with some purposes, using a HAM radio without a license is forbidden, leading to penalizations.

That’s not the case for all contexts though. There are a few occasions in which you don’t need to obtain a license to use a HAM radio.

For example, it’s obvious that you don’t need a license to listen to the local news or entertainment programs in your local area through an FM frequency.

You can monitor the official weather broadcasts or even transmit them locally.

As long as you follow the processes and learn about the regulation in your area, you should be safe without a license.

For professional uses though, you’ll definitely have to get informed about how to obtain a HAM radio license.

How can you obtain a HAM radio license?

You’ll need to get registered with the FCC and then choose the level of license you need for your amateur radio purpose.

There are special requirements for each of these levels, and they are also different in difficulty.

The first level is the “Technician” one and it enables access to VHF/UHF radios.

The second level is “General” and allows you to work with HF bands for international communication.

The final level refers to a full amateur license which gives you the option to operate any type of HAM radio that you wish.

To obtain the license, you need to study, just as in the case of any other exam.

For the first level, you only have 35 questions to go through, while for the last level you have 50.

It’s important to note that you have to get a score of at least 74 to pass.

The study materials might cost some bucks, but nothing out of the ordinary. There’s also a fee for taking the exam and getting the license itself. In total, expect an expense of up to $100.

Besides learning why is it called a HAM radio, you found out more information about this wonderful device.

We hope that the info will come in handy in the future. Take your time to research the topic before investing in such a hobby. Good luck!