CB Radio vs Ham – The Difference Between CB and Ham Radio 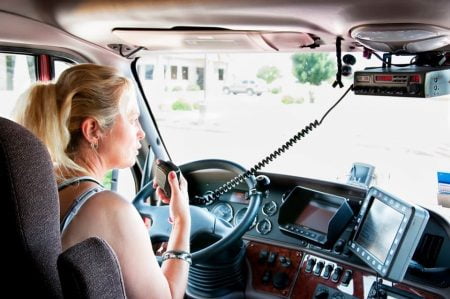 This article is prepared to explain the difference between CB radio vs Ham. Whatever questions you have about these two popular 2-way communication devices, this article has all the answers you need.

CB radios and Ham radios enable family and group of people- friends and associates to interact. The communication over CB radio and Ham radio are always fun-filled.

Yes, technology has paved the way when it comes to communication, due to the ease of access and reach it offers.

Even with the numerous opportunities that technology provides in terms of phone calls and messaging, the simplicity and the convenience that comes with the use of two-way radios are still intact.

Just like years ago, the use of CB radios and Ham radios is still very popular, especially among people who are camping, and road trips & adventure enthusiasts. The popularity of these radios can be linked to their mode of operation.

CB radios and Ham radios do not need a cellular network to function.

This means, where there is an unavailability of cellular networks, which makes it impossible to make use of your phone as a means of communication, the CB radios, and Ham radios come in handy.

Once you are operating within the designed range for the radio, and with no interruptions or obstructions, you can communicate with a group of friends, associates, and family members for as long as you want all at zero cost.

So, when it comes to CB radio Vs. Ham comparison, yes, they are both two-way radios, but the operation differs.

The frequencies, wattage, and range differ. As you read further, you will find a more comprehensive explanation about these radios.

CB Radio Vs Ham: What are The Major Distinction

When it comes to hardware, there are so many factors you have to consider before you make a final decision about which of these radios to go for.

For instance, CB radio can’t go beyond 5 watts- according to the law. On the other hand, Ham radio is permitted to transmit about 1,500 watts by law.

Originally, CB radio supports about 40 channels. If you consider SSB in the 11-meter band, this gives you an additional 80 channels.

The frequencies of Ham radio spread across several bands.

What is CB Radio?

CB radios have been in use as a means of communication before the invention of mobile phones.

You may not have switched on a CB radio in weeks, months, or years. This doesn’t take away the fact that they remain as one of the common communication devices around you.

CB radios have been able to retain their relevance up to this age, due to their cost of use.

In addition to the cost, another factor that has contributed to the popularity and relevance is because you can operate this radio without the need for a license.

CB radios come with about forty (40) channels, with a lot of sideband channels every user can comfortably pick from.

The range of a CB radio is set between one (1) and fifteen (15) miles. When there is an obstruction between the receiving antenna and the transmitting antenna, there may be a break in communication.

This happens when one or more CB radios in the team or group are not stable- If the users move from one point to another.

In terms of wattage, when being operated on the AM band, CB radios are restricted to four (4) wattages. And when they are operated on a sideband, the maximum power is twelve (12) wattage.

The restriction to wattage on both the AM band and the sideband is to ensure the wattage complies with FCC standards.

For individuals who attempt to modify the wattage, if you are caught in the act, such an individual won’t go unpunished.

Before your CB radio can perform well, you must make sure the antenna is about 102 inches long.

If you are making use of an antenna that is shorter than the recommended length, you may need to get the CB radio tuned using an SWR meter before it can work well.

The CB radios make use of AM (Amplitude modulation). The CB radio operates or functions using wider wavelengths.

For users of CB radios, there is a need for a longer antenna to achieve efficiency when it comes to receiving and transmitting signals.

CB radios have a power limit of 4 watts. The power is sufficient for effective communication over a short distance. Any attempt to go higher than the power limit is an offense under the law.

CB radios operate on 27 MHz frequencies. The frequencies are lower when compared to what Ham radio offers. At 4 watts, CB radio doesn’t have enough power to break through barriers such as mountains.

Lower frequencies like that of CB radios indeed make it possible and easy for signals to move over and across mountains, but this can only be effective with a higher power than what CB radios offer.

What Is Ham Radio?

This two-way radio enables the ease of communication between groups of people- This is what all 2-way radios do actually.

So, where does this radio stand out when compared to other 2-way radios?

The simple answer is the range. If you are an individual who wants to communicate with people at a wider range or distance than what CB radios offer, then a Ham radio is all you need.

Ham radios are very effective in situations when there is the unavailability of cellular networks, and there is a need to pass across very important information or call for help.

Let’s take for instance- During an emergency when phone lines are unreachable, Ham radio can be used to communicate to the appropriate channel to seek for help.

Ham radios are versatile- they have numerous outstanding features that make them stand out over the CB radios and other 2-way radios.

You can connect your Ham radio with your personal computer, or other mobile devices to send information and data. Its functions go beyond the use of audio communication.

Before you can make use of Ham radio, you need a license. To obtain a license, all you need is to pass the required examination.

This examination is designed to understand your technical knowledge.

The exam questions are between thirty-five and fifty. The questions entail your understanding of the radio theory, the necessary regulations, and the standard operating practices.

The Ham radio license comes in three categories. The difference between these licenses is the range in which communication can take place. For every category, there are standard bands and modes you are limited to.

If you want to become a member of Ham radio users around the world, you can reach out to licensed members to discuss with them about the necessary steps to follow as you prepare yourself for the test.

For your Ham radio, the VHF & UHF antennas must be at about 19.5 inches in length to perform well.

When you fulfill this expectation, you will get the optimum range of spectrum on both the VHF & UHF without the need for tuning.

In most cases, the antennas that come with the Ham radios are in a perfect state, which limits the need for tuning.

For off-road trips, you may need to review the length of the antenna from 19.5 to about 39 inches.

The reason for this is to support improvement in signals and overall performance.

Higher frequencies ensure the free flow of signals, which is very important for uninterrupted interaction or communication.

You will need a license before you can be allowed to operate a Ham radio.

You can make use of both the VHF and UHF for communication, but they both have their uniqueness.

When you find yourself on water, land, and in the desert, it is advised to make use of UHF.

In these terrains, the signal travels far, and the result is always amazing.

And in case you find yourself on hills and mountains, using VHF gives a better result in terms of transmission and signal.

Some Basic FAQ’s of CB Radio vs Ham

Can a radio perform as both ham and CB – CB radio and ham radio combo?

Having a radio that performs as both Ham and CB is not legal. According to FCC standards, the Ham and CB radios operate under different requirements, which makes it difficult for FCC to allow this combo.

For individuals who have the “unlock transmit” function on their Ham radio, when you carry out the necessary modification, such a radio can transmit signals out of the band.

You can also have all the Forty (40) CB channels programmed on it, which makes it also functions as a CB radio. If you now operate your Ham radio as CB radio because it can do that, you are would be breaking the FCC rules. Well, such a radio is useful during emergencies.

Which one is better for off-roading- ham or CB radio?

Well, for ages, the CB radios have been a popular choice of truckers and other people involved in off-road trips as a means of communication while on the trail.

One of the factors that have contributed to the high level of usage of CB radios among off-roaders is that there is no license needed to operate them. Asides from that, they are also affordable and easy to operate.

Although Ham radios can also be used for off-roading, this means everyone in the group must have a license and a Ham radio for communication to be effective.

Which one offers the best overall performance- ham radio or CB radio?

We know you may want to know the perfect option between these two radios. The truth is that these radios are made for two different sets of people.

Until you know the uniqueness of these two radios, you will keep on asking this question.

The CB radio is designed for individuals who are interested in radio communication but do not want to go through the process of getting a license.

CB radio aids communication over a short distance due to its range, and they are mostly mobile.

Ham radio, on the other hand, is designed for individuals who desire to communicate with one another over a long distance, especially during emergencies.

Well, in terms of reliability and effectiveness when it comes to 2-way communication, you have to give it to Ham radio.

Why do I need a license for Ham radio?

The license is a validation of your technical knowledge of how the radio works. Once you pass the exam you will be issued with a license.

What are the restrictions associated with the use of Ham radio?

You can only use Ham radio for communication between two or more people. Ham radio can’t be used for commercial activities.

Why do people make use of Ham radio?

People make use of Ham radio mainly for communicating over a long distance. Also, the radio is very valuable during emergencies.

Why do people make use of CB radio?

The radio is very useful during adventures to communicate with people in your group. CB radio doesn’t require a license to operate. Also, it is a perfect alternative in areas with no/poor cellular reception.

2-way communication devices or radios remain a reasonable investment option for individuals who like adventure and travel in groups with the need for a means of communication they can rely on.

The CB radios and Ham radios are designed for two different users, according to their needs and commitment to set standards.

Understand your team- identify what works best for you.

For instance, it wouldn’t make sense to make Hams radio your preferred choice of radio for communication when a lower percentage of the team is licensed to transmit on Hams radio.