How To Fix Radio Interference From LED Lights 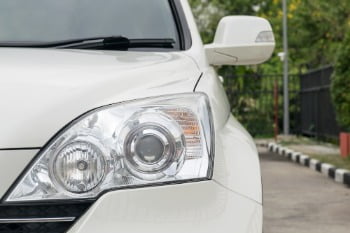 Trying to fix radio interference from LED lights? You’ve come to the right place, as this article will cover everything you need to know about how to fix this irritating inconvenience.

More and more drivers are starting to complain about the interference caused by LED lights, making it impossible for them to listen to the car’s radio.

This can be a real problem, especially at night, as you will not be able to listen to your favorite radio stations if you have your headlights turned on.

Luckily for you, we have gathered the best solutions to eliminate the interference caused by LED lights and included them in this article.

By the end of this article, you will know exactly why this problem occurs, as well as how to put an end to it, so that you can listen to the car’s radio peacefully.

Radio Interference: What Is It And What Causes It?

Radio waves, which are transmitted by radio stations, circulate through the air and can be received by all kinds of devices, called receivers.

The radio in your car is the perfect example of a receiver, as it decodes the waves from the air in order to access information (such as music, news, etc).

These radio waves have different frequencies, and interference occurs when the device receives multiple waves that use the same frequency.

Most of the time, certain electronic devices near the radio are the source of this inconvenience, which interfere with it.

The result is something that we’ve all experienced: that awful buzzing noise that won’t go away. Radio interference is sometimes silent, but the causes are the same.

Some LED lights emit electrical signals that interfere with televisions and radios.

However, this is not true for all lights of this kind, but rather for those of lower quality.

As a matter of fact, there are a large number of poor quality products on the market. These products ignore recommendations and regulations issued by the government, so you need to be careful when buying such lighting devices.

LED lights are becoming more and more popular and for very good reasons.

They use much less energy than incandescent bulbs, but the disadvantage of interferences must not be ignored.

Keep in mind that this is not only true for car headlights, but for any kind of LED lights around the area, including those that are inside the car.

How Do Led Lights Interfere With My Radio?

The surprising truth is that LED light bulbs themselves are not always the source of the problem, but the way in which they are powered.

As you might know, LED lights emit light by flickering hundreds and even thousands of times per second.

The number of flickers is kept under control by an electrical ballast, but some of this energy can be transformed into an electrical signal, which is then picked up by your car’s radio.

How To Fix Radio Interference From LED Lights

Now that we have a better idea of ​​how LED lights work, it will probably be easier for us to solve interference issues and prevent them altogether.

01. Identifying the culprit with an AM radio

The easiest way to find the source of the interference is by using an AM radio. It doesn’t have to be a new one, but you have to make sure it has new batteries, as well as the ability to change the volume.

The setup is simple as well. All you need to do is find a station near the lower end of the dial. Make sure that the radio doesn’t emit any sound, not even static.

If you do it right, your AM radio will play the role of a sensing piece of equipment that receives all signals from the surrounding area.

Also make sure that the volume is appropriate, otherwise you won’t be able to hear and identify the culprit.

Now that we’re done with the setup, it’s time to take the AM radio and bring it close to every LED light on the outside or inside of the car.

Be careful not to miss the headlights, fog lights, brake lights, traffic signals, door lights, overhead lights, etc. Don’t forget that there can be more than one source of interference.

Ferrite cores, also called ferrite beads, ferrite chokes or EMI filters are some small components that you can buy on the internet for a very convenient price.

The way they work is relatively simple. All you have to do is wrap a ferrite choke around the wires that power the lights. The not-so-pleasant part is that you have to use one for each LED light.

However, you will notice that with each ferrite core applied properly, the interference will gradually decrease. Eventually, it will disappear completely.

But how do ferrite colors even work? They basically filter that block or at least reduce to a large extent high-frequency current.

Normally, LED lights should already be doing this, but those of lower quality will need a ferrite core.

It goes without saying that you don’t need ferrite cores on the wires that supply incandescent bulbs. As I explained in this article, they cannot be the source of interference of any kind.

Nonetheless, if you need additional help to install these ferrite cores, we’ve included a video at the end of this article that shows the entire process.

There are some cases when it is best to replace the LED bulbs. This is especially true for interior lights, as it is difficult – if not impossible – to use a ferrite core.

We strongly recommend that you buy high-quality LED lights. It is true that they may be a little more expensive, but the cheap ones will lead to the same problems that you’re trying to eliminate!

Generally speaking, LED light bulbs sold by reputed companies are compliant with the EMI suppression standards, which is exactly what you’re looking for.

There are many reputed brands that you can find on Amazon, such as Philips, Cougar Motor, BEAMTECH, Osram.

Just try to stay away from the no-name brands, unless you know for certain that what you’re buying won’t create interference.

As we have previously said, not only the LED bulb can be the problem, but also the internal components through which the bulb is powered.

Thus, you can choose to replace LED light’s transformer with one that has better EMI suppression. By doing this, you will no longer need to use a ferrite core.

However, it should be noted that such a solution only works on low voltage LED lights. For bulbs with a higher voltage than 12V it is better to implement the other solutions found in this article.

Also, some LED lighting systems to have internal transformers, which means you have to change them completely, as we have explained earlier.

If the lighting system has an external transformer, you can replace it with another.

As with bulbs, the transformers must be of superior quality so that interference is minimized. If done properly, your radio should work on any radio station without any problem.

Although this idea will not completely eliminate the issue caused by LED lights, people have come to the conclusion that longer wires are more problematic in terms of interference.

As a result, we advise you to use shorter wires to minimize the level of interference produced. If that is not possible, shielded wires will do the trick just fine.

Nonetheless, you should take into consideration our other solutions as well.

Products That Will Prevent The Led Lights Interference

In this section, we have included only some of the options on the internet for ferrite cores.

These are quick fixes that anyone can implement in order to get rid of the interference caused by LED lights on your radios.

Q: Why do LED lights interfere with my radio?

A: Poor quality LED lights to have very weak EMI suppression, despite the regulations governing electromagnetic compatibility that exist.

Most often, the electrical ballast of the bulb is the one to blame, as it emits electrical signals.

These are then received by radio, resulting in an unpleasant buzzing or humming noise.

Q: What is meant by radio interference?

A: Radio interference occurs when there are several signals on a single channel or on very close channels.

Usually, electronic signals created by an LED light or any other electronic device make it impossible to listen to a radio, regardless of the frequency that you’re using.

Q: What is a good way to fix LED interference?

A: There are a few things that you could do. Apart from changing the LED light altogether, you could use an EMI filter, also known as a ferrite core, and apply it directly to the wire powering the light bulb.

Alternatively, if you can, you can change the transformer of the light. For other solutions, make sure to read this article and choose the solution that seems most convenient.

Q: Do LED lights interfere with televisions and WiFi signal?

The same goes for televisions and most devices that are supposed to receive a signal through the air.

Luckily for you, the solutions we’ve covered in this article work will help you.

Q: Which type of radio is more vulnerable to interference – AM or FM?

A: AM radios are more vulnerable to interference than FM radios.

For this reason, to identify the device that is causing the interference, we recommend that you use an AM radio as explained in this article.

Despite their technological advantages over incandescent bulbs, LED lights can cause a few problems, especially if they’re manufactured using cheap materials.

We hope that our article on how to fix radio interference from LED lights has been helpful.

As we explained here, there are a few things you can implement in order to get rid of interference completely.

In case you need more help, here are two videos that explain in detail how to fix radio interference from LED lights.

Especially if you plan to use ferrite clips, this video will definitely help you understand how to use them.

The second video can be considered more of a technical guide. In it, you will find more advanced information on how LED lights work, as well as the criteria they must meet in order to be approved.