Steps of How To Build A Radio Telescope At Home DIY 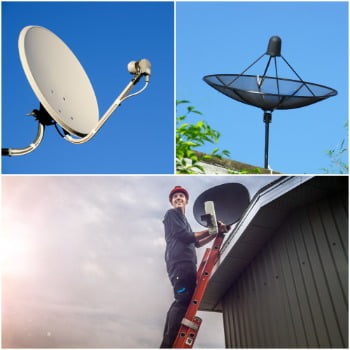 Your sudden interest in the activities along the Milky Way may have prompted you to search for How To Build A Radio Telescope.

And coming across content that contains concise information on the subject can be pretty challenging.

Some authors seem to bundle up everything and put their readers in an even more confused state.

This post will simplify the entire radio telescope building process for you, unlike those other authors.

Therefore, stay with the post from start to finish. If you have been eager to find out what radio telescopes are and what they are used for, here is your chance. We’ve got everything covered in this post.

What is a Radio Telescope?

Before we delve into how to construct a Homemade Radio Telescope, let’s understand what radio telescopes are.

They are employed in the study of radio waves coming from galaxies, stars, black holes, and other astronomical bodies.

Radio waves can equally reflect and transmit radio light off planetary bodies within our own solar system.

Radio telescopes are not as common as their counterpart optical telescopes.

Only a few scholarly personalities and professional astronomers use to have access to radio telescopes.

But thanks to the hard work of technology enthusiasts, you can get yourself a mini-sized radio telescope.

In the most skeletal form, radio telescopes are made of three basic components: one or two antennas, an amplifier and receiver, and a recorder.

As simple as those components are, they can pick up radio waves coming from far away space when they are correctly assembled.

I suggest you keep reading to find out how you can come up with a radio telescope of your own.

Where is it used?

If you want to understand where radio telescopes are used, you will have to wrap your head a bit around the device’s history.

That will give you the perfect picture of where their application is necessary.

The first set of radio waves from outer space was noticed by an engineer known as Karl Jansky in 1933.

At the time, he was working at Bell’s Telephone Laboratories.

His initial intention was to identify the major reasons behind shortwave interference.

He set up a directional-based radio antenna, facing it to different portions of the sky.

He was pretty optimistic about revealing the mystery signals causing the interference.

But Karl Jansky got more than he bargained for. His device setup could pick up radio waves coming from the Milky Way Galaxy’s heart.

He ended up creating a parabolic reflector and positioned it right at the back of his home.

So it is obvious that radio telescopes are useful in any location, not just in space exploration centers.

How does Radio Telescope Work?

Radio telescopes are designed to pick up weak radio waves, concentrate them to a focal point, have the radio waves amplified before sending the information to a computer and recording device for analysis.

For a simpler radio telescope arrangement, you can place the receiver at the parabolic reflector’s focus.

From there, the receiver can transmit the picked-up signal to where recording and analysis will be done.

Although radio telescopes may differ widely, they are formed from two main components – a big-sized radio antenna and a radio receiver.

The sensitivity of radio telescopes depends on the antenna’s efficiency and area and how sensitive the radio signals are for detecting and amplifying the signals.

The most common telescopes around are known as radio reflectors.

They comprise a parabolic antenna that works similarly to a TV satellite dish.

It focuses the incoming radio waves on a small-sized antenna called a feed. Another name for this telescope type is the dish telescope.

How To Build a Radio Telescope At Home – DIY

Creating a DIY radio telescope that you can use at home may not strike you as something achievable.

However, that was exactly what happened at the 2019 Mini Maker Faire that took place in Philadelphia.

Prof. James of Pennsylvania University used a small-sized radio telescope to give visitors a rather unique view of what the sky looked like on that day.

It is also possible for you to build a radio telescope of your own.

Whether you want to have one for curiosity’s sake or just for fun, this section of the post will be exposing everything you need.

The very first point worth noting here is that it costs a lot more when you buy a ready-made telescope.

It is cheaper for you to build one. Consider the giant-sized radio telescopes that astronomers use; they cost hundreds of millions of dollars.

You are not going to spend anything close to that amount if you build your radio telescope yourself.

Experts put it down to a couple of hundred bucks to do one for yourself, excluding the cost of the satellite dish.

But for radio telescopes, it is the other way round.

I can’t tell you for sure how long it will take you to build your homemade radio telescope.

That’s because how much time you are going to spend will eventually depend on some factors like;

So, the duration for making a DIY radio telescope may differ from one person to another, considering the listed factors.

Having listed all the required materials to produce a homemade radio telescope, let’s discuss how you can make it. We’ll list out the steps below;

Congratulations! You have just built your own radio telescope that can be moved from one point to another with great ease.

How to Get Radio Telescope Accurate View

It is not enough to build a radio telescope for the fun of it. Anything worth doing is worth doing well.

The accuracy of the radio telescope you are making is another thing you should pay close attention to.

The image resolution power of a radio telescope is what you should focus on.

That resolution is determined by the dish’s diameter and wavelength of the radio telescope.

Perhaps, that explains why professional radio telescopes are always huge.

Their extremely large diameter size is to enables them to capture faint radiations coming from distant sources.

In Summary, you can get a more accurate view of your radio telescope when using a dish with a longer diameter.

Are radio telescopes the same as optical telescopes?

Although they may have the same principle of operation, radio telescopes are not the same as optical telescopes.

Optical telescopes are for viewing objects far away in the universe; radio telescopes help us receive radiations from extraterrestrial entities.

The main component in the optical telescope is the mirror, while for a radio telescope, the antennas make up the major component.

Is it better to buy a radio telescope as it is for optical telescopes?

Undoubtedly, optical telescopes have become cheaper in recent years, so cheap that it might not make sense for you to attempt to build one yourself.

With just $500, you should be able to get yourself a high-quality optical telescope.

Unfortunately, that is not the case with radio telescopes.

Commercial radio telescopes are occupying the outrageous part of the price spectrum.

You better be ready to spend a fortune if you want to buy one yourself.

That is why DIY radio telescopes are an escape route for those who want to monitor radio wave activities from outer space but cannot afford to buy the device. To build one if you can and save some good money as well.

What is the smallest size of radio telescopes?

If you look at all the radio telescopes that are sited in space exploration centers, one thing is common.

They are all massive in size. A radio telescope that operates between 3m and 30cm wavelength can have a diameter that is more than 100 meters.

But for those telescopes that use wavelengths lower than 30cm, their diameter can range between 3 to 90 meters.

You can have a perfect, working radio telescope planted at the back of your house.

What are some challenges of radio telescopes?

Understandably, the radio signals traveling down from outer space are weak due to the incredibly long distance they have to cover.

So, in most cases, the weak signals are extinguished by the many interferences they encounter on earth.

In that case, before you can get a clear signal, your radio telescope must have a large collecting area.

These earth-borne interference remain a significant part of the challenge that has limited the study of radio waves from outer space.

Is it possible for me to build myself a radio telescope?

The answer to that question is yes. The items you need to build one are not far-fetched.

With a satellite dish you no longer use and some other electronic parts, you can get your radio telescope up and running in no time.

Most of what you will need are things that are no longer useful to people. That is what makes it more fun.

Radio telescopes used to be extremely expensive. Today, they are still costly, given the hundreds of millions of dollars needed to build a state-of-the-art radio telescope facility.

So, can you create a personal radio telescope device for yourself? Yes!

This post has outlined all the items that are required to make a DIY radio telescope. The steps you should follow have been equally explained.

Connect everything that needs to be connected and have your radio telescope set up today! Pick up real space signals in your comfort zone.