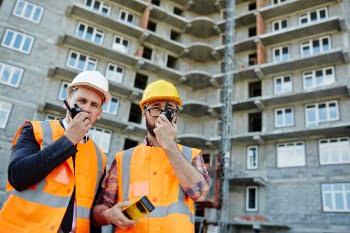 While out there, working in some private place, or just commuting somewhere distant, two-way communication involves a device that’s long-lasting, broad-range, and maintains a decent connection.

Choosing the right two-way radio can be one difficult task.

You can’t just go out and purchase a set of radios and start communicating with them.

Almost all two-way radio services solutions demand some form of license, and radios intended for use in such services have to be FCC-certified.

What Is GMRS Radio?

GMRS is a radio broadcast service that operates on frequencies between 462 to 467 MHz.

The FCC has broadened GMRS to include brief data messaging apps like GPS location details and text messaging.

You can use the GMRS for two-way, short-distance conversations to help licensees plus their close relatives with their operations.

Every licensee is responsible for a system that includes one or more transmission modules.

The following are some of the advantages of GMRS radios:

The range provided by GMRS units is slightly greater than that of other FM UHF radio systems.

If you’re not familiar with it, you may presume that the range is limited to your line of sight.

The area separating these two portable devices ought to be approximately a mile or two in more precise terms.

GMRS allows you to use the duplex feature, a functionality that is only accessible on their unique radio frequencies.

In the Duplex mode, you can simultaneously send and receive signals on identical channels.

Sending your GPS location or text messages to your relatives may now be used to provide crucial information.

What Is MURS Radio?

The Multi-Use Radio Service, or MURS for short, operates on frequencies between 151 and 154 MHz.

MURS channels are most commonly used for two-way, short-range communications with portable, small hand-held devices that work similarly to walkie-talkies.

MURS has been granted permission to use five distinct channels that were formerly used in the industrial/business radio service and were called the “color dot” frequencies under the FCC Part 90 regulations.

MURS frequencies are used by a broad range of radio devices.

What Are the Pros of Using MURS Radios?

The points below highlight the benefits of using MURS radios:

Every one of the 5 frequencies in MURS can send data as well as a voice between two points.

The driveway bells, which send a signal through MURS whenever there is the tripping of the IR sensor, are the finest embodiment of this.

The CTCSS or PL codes are semi-audible sounds that let users function on identical channels without perceiving conversation intended for other clients, which are another covert feature of MURS frequencies.

There’re 38 available PL codes for each of MURS’s five frequencies, resulting in a total of 190 unique MURS channels.

When looking for MURS units to acquire, inspect the output power to ensure it is not greater than two Watts.

If it is, it is a MURS unit that is license-free.

As a result, if you’d like to pick a two-way, long-range unit, you must look for alternatives such as high-power units or GMRS radios.

This will also reduce the reach of the MURS units, therefore if you are looking to link with the repeater to increase the scope of your Handheld Radio, you should use a GMRS radio or another radio.

MURS Vs GMRS: The Basic Differences

So, what exactly is the distinction between GMRS and MURS?

The big distinction between these two is that MURS is a VHF service, whereas its counterpart GMRS is a UHF service.

MURS may be utilized in both professional and personal contexts, whereas GMRS is designed for private communication.

In addition, GMRS needs a license, whereas MURS does not.

FRS does not require a license, although it does have a 500 milliwatts power limit and a non-detachable antenna.

Some of the other variables that differentiate MURS from GMRS includes:

There are so many things to consider when comparing GMRS and MURS.

The particular two-way radio that is ideal for you is dependent on how you want to use it, where you intend to go, and, obviously, the amount of dollar you are willing to stake for it.

While GMRS units are between $45-$90, MURS units are more expensive with their average ranging between $70 to $140.

Portable units transmitting on MURS frequencies may be a 2 – 8 miles range contingent on obstructions and terrain, while GMRS frequencies can attain up to twenty miles.

Several GMRS units can connect via repeater stations, allowing for greater range (usually up to 20 miles or even more).

MRS repeaters with a high-altitude antenna can increase the useable range across a large region – reaching up to twenty miles (32.2 kilometers) radius bounding the repeater station.

GMRS radios utilize FM instead of AM.

While not going into too much detail, FM radio is frequently utilized for regional and music coverage due to its lower static levels.

GMRS radios have a slightly clearer and louder sound than MURS radios.

For most individuals, this isn’t an issue because a good MURS radio would already have good sound owing to its well-made construction and FM transmission.

If you need to communicate quietly, connect these units with walkie-talkie headsets.

However, if audio quality is important to you, the GMRS will give you more clarity and crispness.

This is because GMRS has greater power on its modulating frequency, resulting in very little congestion.

A channel is a frequency through which you may transmit. Each group can have its channel.

A music venue, for instance, may have a channel for surveillance and another one for the decorating staff.

At least twenty-two channels are found on most of the two-way radios found in the market.

Some variants have a lot more channels than others.

You might not be capable of communicating through all of the channels, though.

Ten of the channels, for instance, could be weather warnings.

GMRS has been assigned thirty frequency channels between 462 and 467 MHz.

There are sixteen primary channels and fourteen interstitial channels in all.

MURS has been granted permission to use five unique channels that were formerly used in the business/industrial radio service and were called the “color dot” frequencies under FCC Part 90 regulations.

A two-way radios wattage is a measurement of the amount of power it consumes.

The greater the wattage, the smoother the transmission will be.

This is critical if you wish to send communications across great distances, particularly if there are impediments in the route, such as woods or mountains.

MURS was created in the fall of 2000 by the US Federal Communications Commission as a radio network that allowed for authorized by rule (Part 95) transmission in a limited portion of the VHF range with a two-watt power restriction.

On the sixteen major channels, GMRS companies are allowed to transmit up to fifty watts, but in reality, one to five watts is much more typical.

The interstitial frequencies are those that are in between the major channels and can be utilized for simplex provided as the transmitter power output is less than five watts.

What Is The Best Place To Buy?

Reading to this point, this is arguably one of the questions that are hanging on somewhere in your mind.

There are different places to get MURS and GMRS units once you get started.

Some of the most popular places are our regular eCommerce stores like Amazon, Walmart, eBay, AliExpress, etc.

For an easy experience working on these sites, you can use the search bar provided in these sites to look for a specific product or brand.

While getting the products on popular eCommerce stores is arguably a better route to take, some vendors have their official websites where you can buy their products.

The choice of yours to make.

The Basic FAQS About The GMRS Vs MURS Radio

With 2 watts vs 4-5 watts, MURS units are less powerful than GMRS units.

However, because VHF has a greater range than what is obtainable in UHF, MURS is typically the winner in terms of distance.

Realistic distances of 0.5 to 1 mile are commonly reported by GMRS users.

You can enjoy up to two miles in clear line of sight circumstances.

02. What are DFive MURS Frequencies?

Since 2002, MURS units have been licensed to function on five VHF frequencies called the VHF “color dot” frequencies by users.

MURS is only allowed to broadcast at a maximum power of two watts.

03. Is it Worthwhile to Get a GMRS License?

GMRS provides a range of benefits to satisfy your communication demands. Getting a license ensures your legal status, protects your entire family, and enables you to practice daily.

Do not wait till the communications networks have failed to know how to use them.

In terms of power, GMRS units have an overwhelming advantage over FRS because they are far more efficient.

Although the bulk of GMRS devices are restricted to five watts, some more sophisticated models can consume up to fifty watts.

05. Is The GMRS License Required?

An FRS frequency is confined to reduced power and does not need a permit; GMRS frequencies, on the other hand, give way for greater power and should need a license, although this has not been widely followed or implemented.

It is wonderful for whole households because broadcasting on MURS channels needs no license and may be utilized by any American resident of any age.

Several companies still have “grandfathered” rights to broadcast the MURS frequencies, so you could encounter the infrequent drive-thru restaurant or supermarket on a particular channel in certain locations.

Every user must use these frequencies and ensure that they do not conflict with one another.

We’ve researched for you since choosing the finest two-way radio boils down to what you are ready to pay and what need in two-way radios.

Whether you’ve decided to go with a MURS or GMRS unit, each has its own set of benefits and applications.

Do you even have a two-way unit that you can use in an emergency?

Which one did you pick, and why did you choose it? Let us know!